The Blood Protein Research and The Art of Lymphasizing 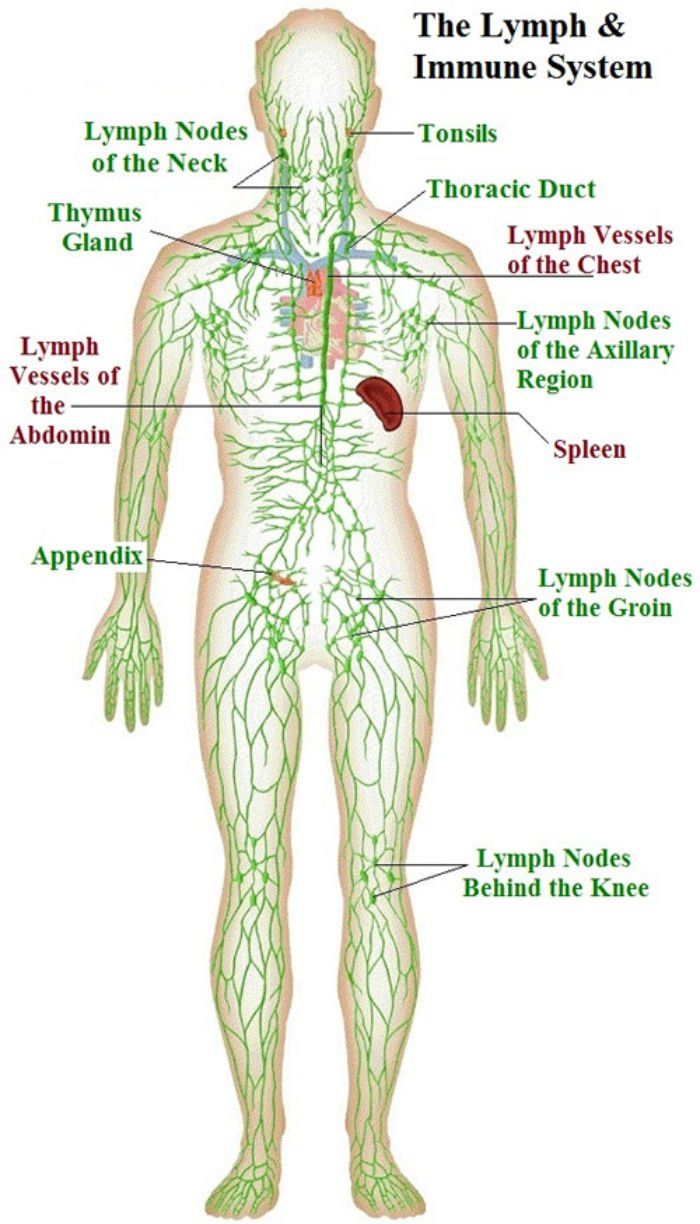 The cleansing process of the body is performed by a mechanism that is called the lymphatic circulation.

Every solid structure in the body is bathed in lymph. There is approximately 12 quarts of lymph in the body compared to three quarts of blood plasma. The lymph in the capillaries is the irrigation water that brings minerals and nutrients to the cells.

There are about one hundred million cells held together by appropriate supporting tissues. These cells in turn are organized into different functional structures, some of which are called organs. Each functional structure plays a part to see that there is a correct amount of fluid with the associated mineral salts around the cells.

As long as the fluid around the cells remains free of toxic waste and contains the right mineral balance, the cells will continue to live and function normally.

Research reveals that if the fluid medium in and around the cells was right, it would be impossible to damage or kill the cells.

Scientific research states that there is a continuous automaticity of the body. All the cells will live in a healthy condition until one or more of the functional structures in the body loses its ability to function properly. When this happens, all of the cells of the body suffer.

Moderate dysfunction of any one of the functional structures leads to sickness, while extreme dysfunction leads to death. Therefore, the main purpose of our body organs is to contribute to the continuous automaticity of the body by keeping the fluid medium in and around the cells right.

To keep the cell environment clean, nutritious and chemically balanced, the lymph system must play its vital role.

The liquid circulates in the lymphatic function of applied pressure The lymphatic system is a hydraulic pressure. Every time you create pressure below a one‐way valve, the valve opens allowing the liquid to flow into the next chamber. Each segment of the lymphatic valves between each successive acts as an automatic pump separate.

The tiny smooth muscles that surround the lymphatic vessels are sensitive to the pressure inside the vessels. When a segment is full, it contracts, pushing the liquid through the valve into the next lymphatic segment. In this way it works as the entire lymphatic system were a lymphatic pump. The most important function of the lymphatics is to keep the blood proteins circulating. Other than that their main function is to drain away the lymph that has lost its nutrients after the cells have extracted them. The dead fluid, produced as a result of cell work, must be continually drained away. The lymph then is filled with waste products that pass through the lymph nodes. The lymph nodes fulfill the function of filter beds. These nodes form secretions and possess cells which have the power of neutralizing, dissolving, destroying or taking up the debris or waste products which may be in the body.

The liver, which is one of the biggest detoxification plants in the body, is loaded with lymphatics. After the lymph system neutralizes or dissolves the toxic wastes and renders the poisons inert, the lymph that is returned into the veins will be in a state of comparative purity. If the lymph system fails to function properly, it can cause hepatitis (infection of the liver) and every other “itis” you can think about.

Even though the lymph system acts like a modern sewage treatment facility, it is literally the tree of life inside the body because when this system fails to function properly, excess blood proteins along with excess fluid and poisons build up in the body and pain, loss of energy, infection and disease will take place.

Any mental, emotional, or muscular activity puts cells to work and working cells put off poisons that must be carried off by the lymph system or they will dilate the blood capillaries and cause ‘trapped’ proteins.

If the body was free of trapped proteins, it would be in the dry state where there is no excess fluid around the cells. In this condition, the white blood cells can act, even in the absence of antibody. Therefore, it would be impossible for us to have an infectious disease if we could prevent our blood proteins from becoming trapped.

How can blood proteins cause death?

What upsets the sodiumpotassium balance inside the cell?

Excess sodium outside the cell will upset the delicate sodium‐potassium balance inside the cell.

What causes excess sodium outside the cell?

The answer is, “our blood proteins”. The proteins that make up part of the blood plasma carry a negative charge. If these proteins get trapped in the spaces around our cells, they will pull the positive sodium ions to them.

This combination greatly increases the fluid retention in the spaces around cells to cause a lack of oxygen and nutrients at the cell level. Therefore, if our plasma proteins get “trapped” in the spaces around our cells, we will not only have fluid retention, but we will also have excess sodium around our cells that will upset the sodium‐potassium balance inside the cells to further damage or kill the cells.

Our blood proteins can collapse our circulatory system and cause death in just a few hours if they get trapped quickly throughout the body as in traumatic or surgical shock, severe burns and accidental injuries. If the blood proteins get trapped slowly, the body will adjust to live in a sick or diseased state.

The Human Body is an Electrical Being

Science has proven that the human body is an electrical being. Our thought waves are electrical, the energy coming from our eyes is electrical and our muscles work by electrical impulses from our brain.

The delicately balanced distribution of minerals in and around a living cell, whether plant or animal, accounts for its electrical  properties. The rotation of sodium and potassium in and around the cell is called the sodium‐potassium pump.

The whole body works electrically off of the energy produced by the sodium‐potassium pump.

Loss of Energy is a sign of trapped proteins

Loss of energy in your body is one of the first indications of trapped plasma proteins.

Trapped plasma proteins produce excess fluid and excess sodium around the cells, which will alter the electric energy produced by the cells. The result will be a symptom of a disease. And the reverse is also true. If we have no trapped proteins, we have no excess fluid or excess sodium around our cells and the ‘generators are on’ and ‘our Body is healthy’ Medical schools teach doctors how to treat the symptoms of trapped plasma proteins.

A Certified Lymphologist can teach people how to prevent and if possible reverse the trapped blood proteins.

3. To have healthy cells, the body must be able to maintain a negative subatmospheric pressure condition, or what is called a dry‐state where there is no excess fluid – only enough fluid to fill the crevices around the cells, and that is all. 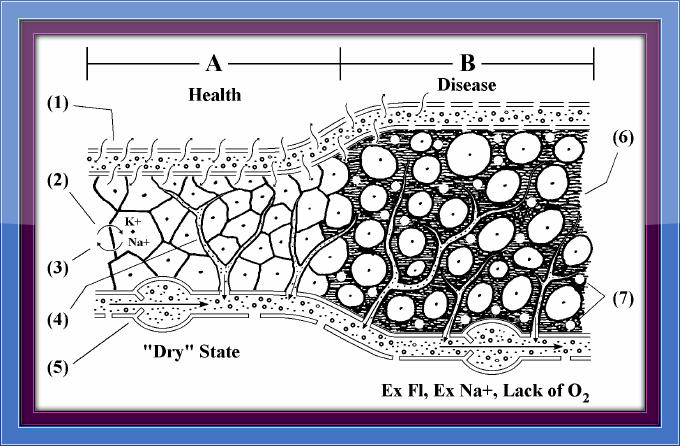 In Healthy condition (see the white‐left side of the picture), the tissues of the body are sealed under vacuum. When the body moves, the interior tissue undergoes a negative pressure and this causes the lymphatic drainage. This will create a subatmospheric pressure which keeps the cells clamped near the blood capillaries. This vacuum condition is crucial for adequate nutrition, as nutrients pass from blood to cells through the extra‐cellular fluid by diffusion. The more the cells are firmly “packed” close to the capillaries,
the easier it is for them to receive nutrients.

4. Trapped blood proteins attract excess sodium and will pull water out of the blood stream to produce excess fluids and excess sodium around the cells which are the conditions that will cause a lack of oxygen and will upset the delicate sodium‐potassium balance in and around the cells which will cause loss of energy, disease and death at the cell level. Lack of oxygen or excess sodium will reduce the electrical energy produced by the cells and will damage or kill them. Trapped blood proteins produce both of these conditions. Man must learn how to untrap the blood proteins and keep them circulating in the body via the lymphatic system. To do this, he must learn the new science called The Art of Lymphasizing.

5. The complete Art of Lymphasizing is a new science that reveals the mental, nutritional and physical laws of health which man must obey to keep the blood proteins circulating via the lymphatic system.

To know how to use a Lymphasizer properly is like having a second set of lungs.

6. When trapped proteins reduce the energy field produced by the cells, they stick together or cluster which makes them very difficult to be removed by the lymphatic system.

7. One of the ways to dissipate or remove trapped or clustered proteins to help relieve the pain, speed up the healing process and possibly reverse injury or disease is the proper exercise of deep breathing techniques on and off of a Lymphasizer!

On 24th of June 1980, at the 8th International Congress C. Samuel West,
Chemist and Lymphologist, presented the basic formula
for a healthy cell, a healthy body and for
LIFE:

These seven golden discoveries and this formula reveal that the human body is an electrical being, that every cell is an actual chemical electrical generator and they show how trapped blood proteins produce the conditions that will upset the chemical balance, shut the generators off and damage or kill the cell.

They also reveal that electricity and other sources of energy can dissipate the trapped blood proteins and reverse the conditions that cause pain, loss of energy and disease; and healing can take place faster than we have ever dreamed possible. This knowledge helps us to understand that any healing art that works must somehow be able to dissipate the trapped blood proteins which produce the conditions that shut the electrical generators off to damage or kill the cell.

This knowledge has given birth to a new science called the Art of Lymphasizing. With the understanding of this new science anyone will be able to know what they can do to prevent and if possible reverse the conditions that cause pain, loss of energy and disease.

Every healing art on earth involves getting oxygen to cells.

The lungs act as a “suction pump” for the lymphatic system.

Deep breathing will help remove the trapped proteins and turn your generators on.